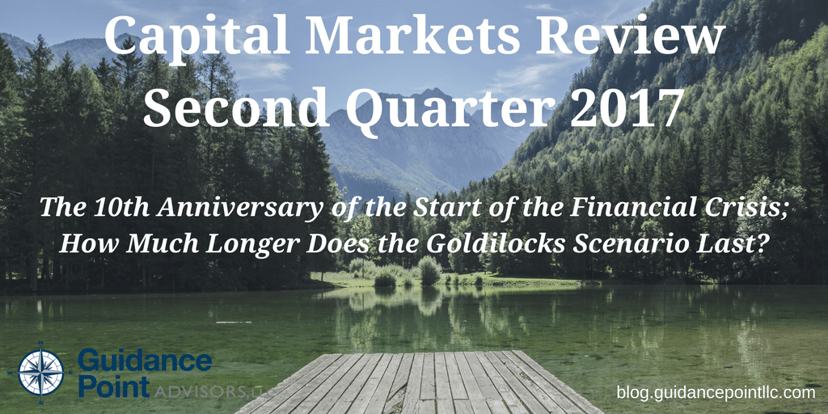 The 10th Anniversary of the start of the Financial Crisis; How much longer does the Goldilocks Scenario last?

The Goldilocks scenario raises the question of how much longer the combination of outsized gains and ultra-low volatility can continue.  When does mean reversion eventually kick-in, like it typically does?

The US economy continues to generate solid and stable growth as the expansions enters its eighth year, making it the third-longest on record. With nearly full-employment levels, low energy prices, elevated consumer confidence and stock prices hovering near record highs, the first quarter GDP was estimated to be +1.4%, up from the prior estimate.

The global economic environment continues to improve with most regions set to deliver robust growth in 2017.  Eurozone grew at an annual 2% GDP rate in the first quarter, while China’s economy is expected to grow close to its potential in ‘17.

Equity markets delivered robust gains in the quarter, extending the rally that began just after last November’s presidential election. The S&P 500 finished the quarter with a gain of +3.1% fueled by a solid and stable domestic economy, a recovery in European economies, clarity on interest rates, and investor optimism regarding the results of the Trump administration’s policies.  The Chicago Board Options Exchange Volatility Index, known as VIX, hovered at its lowest levels on record.

As in the first quarter, the FOMC signaled a move to raise interest rates.  Then in their June meeting, they also announced the decision to move ahead with reducing the Fed’s balance sheet, possibly as soon as September. Fixed income positions suffered steep losses in the last week of the quarter as investors realized that the combination of rate hikes and balance sheet reduction may mean that the long period of extremely accommodative monetary policy is ending.

If you enjoyed this blog, you may also enjoy the following:

What Is An Expense Ratio

Retirement Versus College: Where to Save First

Top 5 Problems with Financial Advisors and How to Solve Them